Living with Lenny #2: When Lenny came to stay 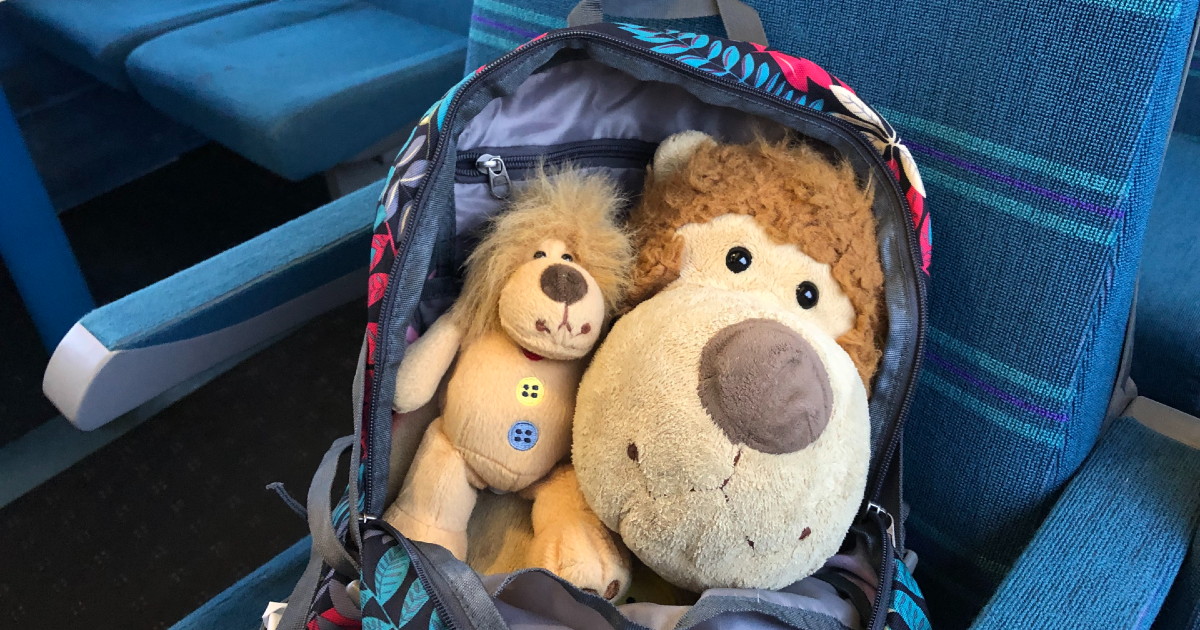 In this post you'll find...
Working to a tight deadline
Finding an extra Lenny
Feeling a deep well of grief
New responsibilities
That sinking feeling
Finding the silver linings
Here we go again
Bathtime!
A necessary sacrifice
Settling in to family life
Ride the wave

This is the second chapter in the Living With Lenny saga. In case you missed the first chapter, you can read it here: Living with Lenny #1: How Lenny came into my life.

Working to a tight deadline

The day I went to collect Lenny from Allan, he was in a bit of a tizz (Allan that is, not Lenny). In true Allan style, he’d left everything until the last moment. So, he had 36 hours left to finish building the inside of his bus, pack up all his things from the flat he’d been staying in, find somewhere to store it all and leave the place clean and tidy!

I went over to help him move, pack and clean, and his mum helped too. It was a long, tiring day and by the evening there was still lots to do. So, I kipped over for the night in one of the kids’ bunk beds! Allan was very grateful for this, not only because I was sticking around to help him some more, but because it meant he got another night with Lenny. He thought he’d spent his last night with him already and was feeling very sad at the thought of not seeing him for the next three months. But now he was able to cuddle up with him for one more night.

The next morning, after everything was finally packed away, the flat was cleaned and Allan was almost ready to hit the road in Bettie the bus, he had to say a sad farewell, not only to Lenny, but to Baby Lenny too. Baby Lenny had only recently been discovered, hiding amongst the family’s things, and was almost threatened to be sent away to a chazzer (that’s a charity shop for those not in the know). Of course, I said “Noooooooo! You’ll do no such thing.” So, Baby Lenny came to stay with Lenny and me instead. 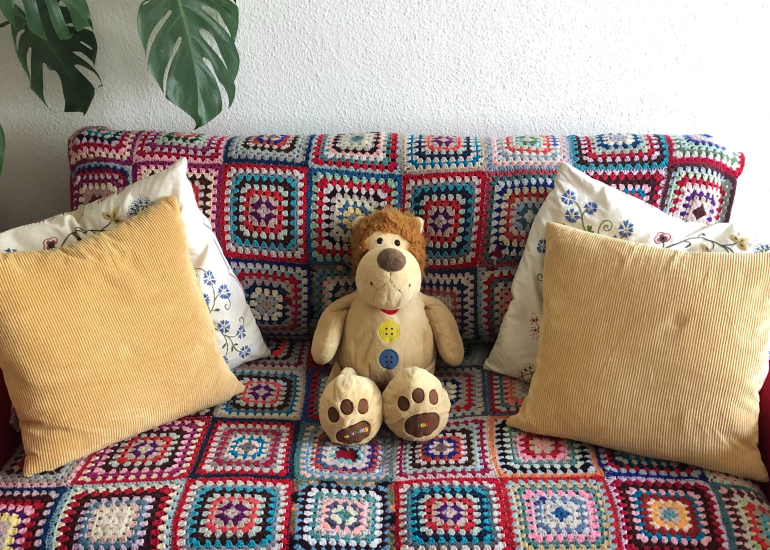 Feeling a deep well of grief

Although it was sad for Allan to say goodbye to Lenny, it was even sadder when he and I had to say our farewells. There were long hugs and many tears. A deep well of grief rose up inside me, as I thought about the next three months and Allan not being around. The grief was also connected to all that could have been – the hopes and plans we’d had for our future together. We’d been through a break-up already a few months previously, but now we had to go through it all again, with those familiar feelings of loss, pain, grief and sadness arising in us once more.

Although I knew I’d see him again in three months’ time, I didn’t know for how long, or what his plans would be then. If he continues with his intention of becoming a trainee monk, then I won’t be able to hug him, or even touch him, for a whole year, and possibly forever. That’s a very strange thought to get your head around.

So, after our painful goodbyes, Lenny, Baby Lenny and I set off home on the train. I explained to Lenny that he needed to be a big lion now and be strong, because Baby Lenny was counting on him being there, no matter what. And that’s quite a responsibility for a lion to take on board. As I looked deep into Lenny’s kind black eyes, I knew he understood. And as I looked over at Baby Lenny, a smile crept over my face and I chuckled to myself. “He’s like a mini, comedy, punk rock version of Lenny!” I thought. 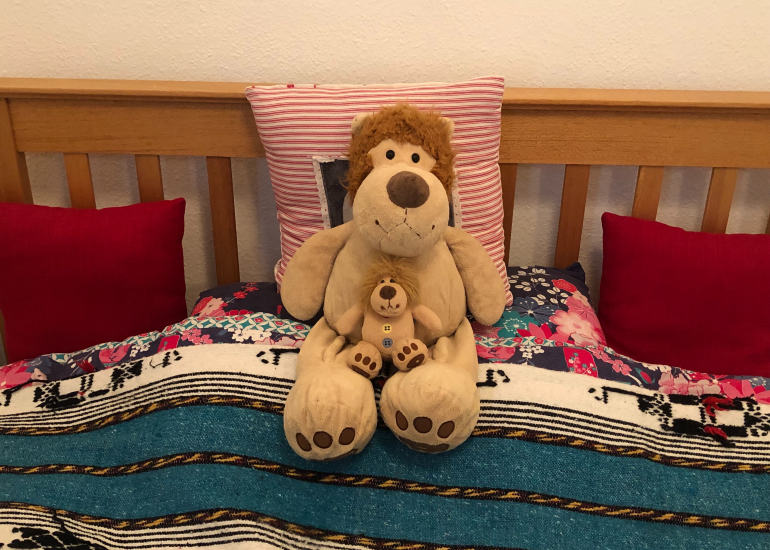 Allan’s mum had kindly dropped us at Wivelsfield station and we were both holding back the tears as we went our separate ways (Allan’s mum and I, not Lenny – he’s a big, strong boy now). After arriving into Eastbourne in the early afternoon, we walked home and reflected on what a strange day it had been so far. All we felt like doing was curling up on the sofa with popcorn and a movie and having a good old cry and a cuddle. But, as we approached the front door and I reached into my bag for my keys, I had a horrible sinking feeling. I knew the keys weren’t there, even before I looked.

And I knew instantly what had happened. My mum had been staying with me the day before and I left the flat before her. Usually, picking up my keys is the last thing I do before I go out and I use them to double lock the door behind me. But, because I was saying goodbye to my mum and didn’t need to double lock the door, I just forgot to pick them up.

Now, if you know anything about me, you’ll know this is very unusual for me. I never lose things and very rarely forget things. I know it’s easily done, but I felt so stupid. And this really wasn’t great timing!

Luckily, my mum had taken the spare set of keys with her. And, also Iuckily, I had enough phone battery to call her. But, alas! She was out on a day trip with my aunt and the keys were back at my aunt’s house in Brighton! At least my uncle was in, so if I could make my way over there, I could look for the keys in the house (she didn’t know exactly where they were but felt sure I’d be able to find them easily enough!).

I tried a few of my neighbours’ bells and luckily someone let me through the main front door, so I could leave one of my bags outside my flat. Now, at this point Lenny and Baby Lenny were safely tucked away in my rucksack. I did briefly consider leaving them in the bag outside my flat, but thought better of it. They’d be in full view of anyone passing through the hallway, and what if someone stole them?! Plus, it wouldn’t be a very good example to set Lenny when he’s meant to be learning to be more responsible.

So, Lenny, Baby Lenny and I headed back to the station, took a train back to Brighton and finally found the spare keys at my aunt’s house (after another phone call to my mum). We then took yet another train back to Eastbourne, walked home (again) and finally collapsed in a heap on the sofa. Phew! 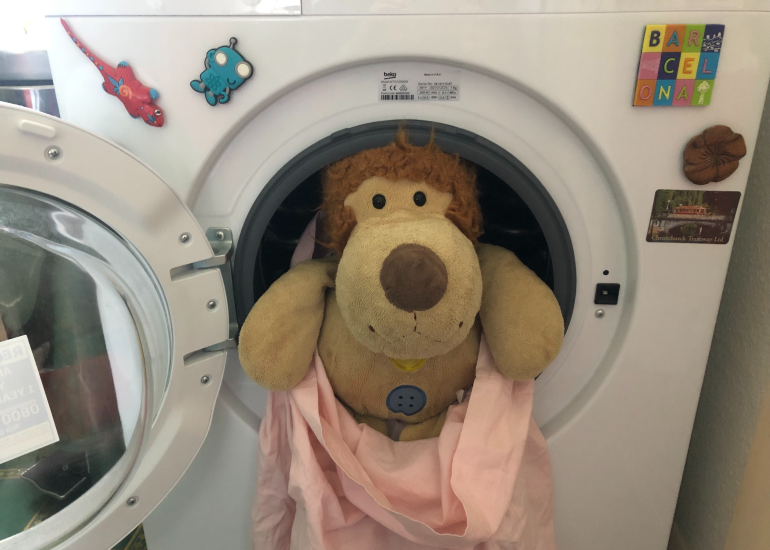 After we’d recovered from this strange ordeal, we had an important task to do before Lenny could sleep in the bed with Baby Lenny and I. It was coming up to New Year’s Eve and Lenny had already made a resolution that he wanted to get clean this year. Lions tend to have rather addictive personalities, you see. Actually, I’m kidding. He just wanted to get cleaned up. As in, with soap.

So, we all decided the first thing we should do is give Lenny a bath. Now, lions don’t tend to like languishing in a hot bubble bath like you or I might. They much prefer being cleaned in something called a washing machine. Seriously, they much prefer it. He did request to be wrapped in a pillowcase first, though, just for comfort and protection. But, unfortunately the pillowcase didn’t stay wrapped around him for long. 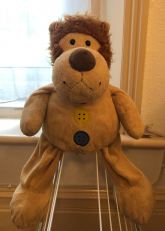 Anyway, Lenny loved his bath and said he felt clean and fresh afterwards. And I was pleased that he no longer smelt like the flat he’d been staying in. There’s nothing worse than someone else’s smell lingering in your lion’s mane, especially when you want to cuddle that lion in your bed at night.

Lenny sat on the drying rack by the window overnight and then by the heater the next day. Although he was a little sad not to be joining Baby Lenny and I on our first night together in their new home, he knew it was for the best and that it’d all be worth it in the end.

Settling in to family life

And he was right. From the next night onwards, Lenny, Baby Lenny and I cuddled up to each other every night, keeping each other warm and comforting each other when any of us felt a little down.

And, most nights, Lenny would also join me on the sofa to watch an episode of our favourite TV series. He likes dark comedies the best, which never fail to make him smile. But he also has a penchant for psychological thrillers and can’t wait to tell Baby Lenny all about the twisting plotlines when we get back into bed. Unfortunately, he’s not really into nature documentaries so we tend to avoid those, or else I’ll watch them on my own while he and Baby Lenny chill out in the bedroom.

When I have friends round for the evening, Lenny sometimes feels a bit left out because I’ve told him he has to stay in the other room. I think he understands, though, and knows he has to keep Baby Lenny company so that he doesn’t feel left out. And, as I said earlier, looking after Baby Lenny is an important responsibility for a lion to take on board. Even for a big, strong lion like Lenny.

Sign up to receive my latest blog posts and wellbeing tips, a FREE guided meditation to find your happy or safe place and a FREE ultimate guide to improving your sleep

Next Post: What is flow state and how do you reach it?